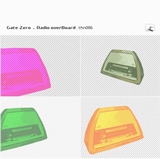 From Düsseldorf, Germany, hails Gate Zero who introduces himself to Thinner with his first own solo release on Thinner after the compilation debut on THN070 Crossways. The playing time of the tracks immediately reveal that these 9 tracks are quite compact and might look sketchy at times, however they are straight on the point and fill the playing time with a lot of content. Altough released not before today, these tracks are a little older viewed from the production date. More music from Gate Zero can be heard on Stadtgrün Netlabel and on Fax +49-69/450464.

Music wise these tracks are a little difficult to associate to any particular genre, which is a delicate factor. Pete Namlook from the Fax +49-69/450464 Ambient label characterized the styles of Gate Zero as "environmental music" - a description that comes very close on this release aswell, from our point of view. You will barely find any classic resemblings or reproductions of any concrete styles - all of it is the product of the multiple influences that are crusing within the musical mind of Gate Zero, waiting for destillation in tracks like 'Crossing The Channel' or 'Moonlight Bath'.

The common factor of it all is atmosphere, would it be a shattered one as in 'Take My Breath' or a more loungey as in 'Loop The Vibe'. Then Gate Zero adds minimalistic percussive elements placed on top of variable beats and unusual loop points. This melange of elements and the short playing time of the tracks make it all to an interesting listening environment, where also classical instruments as the piano and guitar is utilized.

The title 'Radio overBoard' itself is a rather critical reflection of the commercializing and disembowling attitude of the music industry towards electronic music trends. Scouts pick up the interesting genres and begin to set up compilations of lousy selection quality that no one really needs, compilations that more pollute the music market then enrich it from the critical point of view. Thus the radio nearly lost it's entire function as a transmitting device of exciting new music trends. Today the streamed content is a blatant body full of adverts to get the people buy the new products, where quality does not decide but furthermore the largest marketing budgets behind. Therefore, listening to radio has become obsolete - today it can be thrown overBoard.

Reviewer: LAJ - favoritefavoritefavoritefavoritefavorite - May 6, 2006
Subject: Atmospheric and Lounge-Inspired
If forced to classify this resplendent new Thinner release I would use the adjectives ÂatmosphericÂ and Âlounge-inspiredÂ. ÂRadio overBoardÂ goes beyond the more traditional Thinner house and dub-influenced sounds by blending exotic beats and rhythms with the more traditional sounds and instruments. For an atmospheric flavor, listen to ÂMoonlight BathÂ were hints of dub and house meet with the organic sounds of ocean waves and birds or the almost drone-like ÂTake My Breath Â in which smooth, flowing chords intermingle with transparent tones and odd, intermittent sounds. For a slightly more lounge-like sound, listen as dissonantly played muted notes and light chords of ÂEnvironmental OsterathÂ merge with the nostalgic sounds of distant voices or try ÂCrossing the ChannelÂ where peculiar beats, deep bass, piano, and floating electronics entertain and relax the mind. The varying rhythmic structure, choppy beats, loops, and sparse piano notes of ÂLoop the VibeÂ also contribute to a lounge-like atmosphere. The trio ÂRadio overBoardÂ, ÂTrip IllusionÂ, and ÂRepriseÂ all put heavy emphasis on beats but not at the expense of each trackÂs idiosyncrasies. Radio overBoardÂ has a melancholy tone with distorted electronics while ÂTrip IllusionÂ is an almost playful selection of sparingly played guitar notes and a simple, but moving, bass line. The haunting female vocals, beautiful keyboards, and electronic noises that appear to emulate a saxophone make ÂRespriseÂ a keeper. -LAJ-

Uploaded by Thinner/Autoplate on May 2, 2006