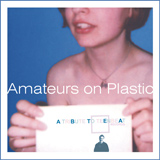 by
My Mean Magpie Recordings It was 1985 when a small cassette label began in the classrooms of Wakefield High School in Arlington, Virginia.

As of March 2002, TeenBeat's discography had grown to include over 300 items, including 7" records, CDs, posters, t-shirts and unavailable items and events as diverse and absurd as bricks, houses, injuries, and a Zenith Solid State Stereo.

On June 7th 1998, the TeenBeat Mailing List wa started has grown to its modest, but faithful, membership over just over 200 members.

It was 9:02 PM September 2nd 1999 when, I brought up the idea of a TeenBeat tribute album to the list. To be quite honest, I don't recall writing or sending that e-mail; it wasn't until exactly five months later on February 2nd, 2000 when Kent Burt (The Linger Effect) asked, "what's up with the TeenBeat covers disc/ tape/ whatever??" that the compiling of the songs that would make up Amateurs on Plastic began. Completed and released in April of 2002,
it is now December 1st, 2004, over two years after the release of the tribute, and it sounds just as good now as it did then.

We are currently compling tracks for a second volume. Details can be found here.

Also, check out these other fine My Mean Magpie Releases.

When the compilation was initially compiled it was done using an MP3 of The Vox's "Neely." For this reissue it has been replaced with the intended mix.

The artwork has also changed and the booklet has been reformatted for a standard printed. Where possible the contact information for the bands has been updated.

After the CDs initial release it was recognised by Teenbeat Records and assigned the number 344.

Reviewer: Soulissimo - favoritefavoritefavoritefavorite - May 10, 2005
Subject: some great pop nuggets in here
This goes for a lot of the My Mean Magpie output: not all is fantastic, but lots of it is, and there's some tunes on here that manage to put a smile to my face everytime I hear them like Neely [new mix] by The Vox.
I'm collecting the highpoints of this label and it's quite easy to string them together and form a killer compilation album. Timeless, charming, cute indie. For fans of John Wayne Shot Me.

Reviewer: Five Seventeen - favoritefavoritefavoritefavorite - December 2, 2004
Subject: From Exclaim Magazine
A tribute to the artists of Teen Beat Records, where a variety of obscure, yet talented, artists made lo-fi submissions to pay homage to their favourite Teenbeat tunes. Amateurs... comes with a heavily annotated booklet with detailed commentaries on the artists, the Teen Beat label and the recording transfer process. Though the submissions were mostly lo-fi - audiocassette transferred to CD - it is filled with life where the artists are actually having fun while playing music and recording. Amateurs on Plastic has all the charm of the garage pop rock tunes of old. Out of this comp of 23 different bands, ranging from rock to punk to spoken word to lounge, they all have a catchy pop sensibility that would leave the listener hooked to most, if not all, of these songs. Among the most striking tunes were "Safety in Numbers," by Vermillion, "Number One," by Pacer, and "Cape May," by Mark Robinson, which are all fun rock tunes with a groove-able tempo, catchy guitar hooks and lyrics. "Now I Need You," by Bossanova, has a great "suave Loveboat lounge singer with gusto" quality backed by guitars, drums and sappy soap opera organs. Another favourite is "Cold Heart (Warm Bed)," by the Yarns, because it is so simple and melancholic, articulated with guitars, a harmonica, what sounds like someone hitting a tin can and a melancholic-voiced girl sombrely singing the saddest song. My Mean Magpie, in collaboration with the Unlike Label, has put together a veritable treasure trove of exceptional lo-fi pop rock tunes.
- I. Khider
October 29th, 2002