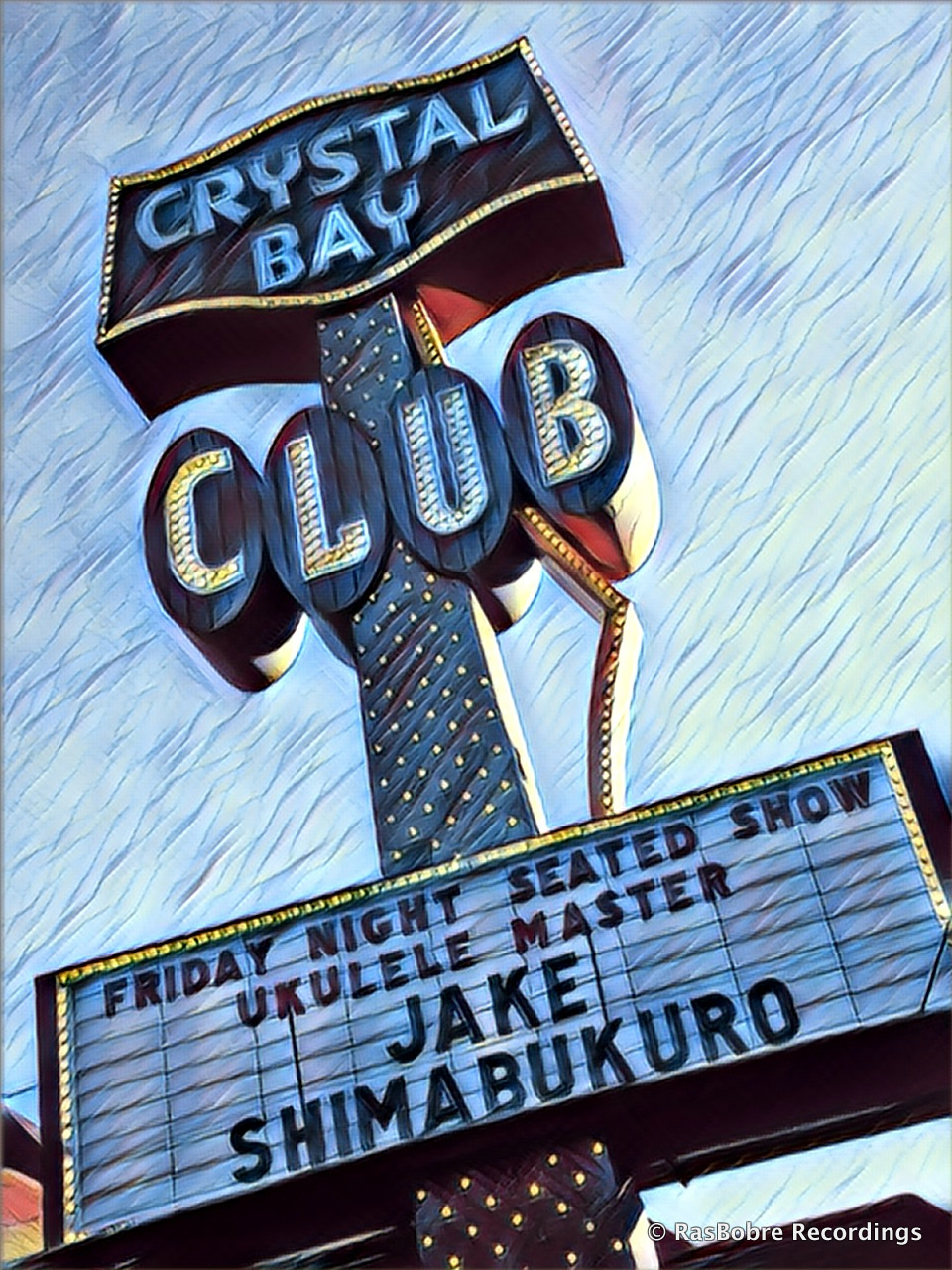 About Jake Shimabukuro:
Almost everyone in Hawaii has strummed a ukulele at one time or another. But at the age of 14, Jake Shimabukuro realized that he was doing something a little different with the four-stringed instrument – OK, a lot different.

Shimabukuro’s wholly unique approach to the ukulele started early. As a youngster growing up in Honolulu, Hawaii, Shimabukuro started playing the instrument at the age of four, learning the basics from his mother, Carol, and then developing his craft further by studying the likes of musical masters such as Eddie Kamae, Ohta-San and Peter Moon. As he matured, Shimabukuro also found inspiration from guitar players, drummers, pianists, and singers. Even athletes helped fuel the intensity of his artistic fire.

In 2005, Shimabukuro’s touring career really came to life with a video on YouTube. “I didn’t even know what YouTube was at the time, so I was totally surprised when people started telling me they’d seen a video of me playing ‘While My Guitar Gently Weeps,’” he says. “Before I got a chance to check it out myself, the video had gone viral and a lot of music industry folks seemed to know about it. It was crazy!” Shimabukuro’s deeply beautiful and original take on George Harrison’s love ballad, one which captured colors and moods never associated with the ukulele before, opened the floodgates – now legions of new music lovers had to hear this instrumental marvel – and the 2006 release of Gently Weeps (produced by Mac McAnally), which mixed his own originals with equally adventurous versions of “Ave Maria” and “The Star-Spangled Banner” was an unqualified success.

Shimabukuro’s records have topped the Billboard World Music Charts on numerous occasions, and as a live performer he has become one of the hottest tickets around. He’s played with world-renowned orchestras and at prestigious venues such as the Hollywood Bowl, Lincoln Center and the Sydney Opera House, and has dazzled audiences at music festivals including Bonnaroo, SXSW, the Playboy Jazz Festival and Fuji Rock Festival. He even performed for that rarest of audiences: Her Majesty Queen Elizabeth II. Not too shabby for a humble young man from Hawaii and his trusty ukulele.

Even with the constant demands on his time – Shimabukuro tours roughly half the year and makes frequent appearances on media outlets such as The Today Show, Good Morning America, Jimmy Kimmel Live!, Late Night with Conan O’Brien, A Prairie Home Companion and NPR’s Morning Edition – Shimabukuro’s album output hasn’t slowed. In 2016, he recorded the all-original Nashville Sessions at Music City’s famed Ronnie’s Place studio with producer R.S. Field (Steve Earle, Webb Wilder) and the ace rhythm section of bassist Nolan Verner and drummer Evan Hutchings. And now he’s returned to the same city and studio – and with the same gang, too (augmented by guitarist Dave Preston) – for his newest record, The Greatest Day, which will be released on August 31, 2018.

“I had such a great time working with R.S. Field on Nashville Sessions,” Shimabukuro explains, “and I knew I wanted to continue working with him on The Greatest Day. On the last record, it was pretty much the sound of a live trio, which sounded fresh, raw and organic. We were basically writing and improvising in the studio. Now we’ve expanded to a quartet, which has added more colors and variety to the overall production. Once we recorded the live takes, we experimented with overdubs, and added horns, strings and keys, and other funky sounds. There are even some vocals on a few cuts.”

The 12 tracks that comprise The Greatest Day feature some of Shimabukuro’s most imaginative and adventuresome playing yet. Half of the album is devoted to originals, on which the instrumentalist reaches new heights of compositional distinction. And on the covers, Shimabukuro’s prodigious skills allow him to achieve the impossible, transcending his material – no mean feat considering some of the classics and standards he’s tackling.

Among the self-penned tunes, there’s the blissed-out title track, so effervescent and airy that it transports the listener into the clouds. Shimabukuro wrote the song the night before going into the studio. Shimabukuro, Verner and Hutchings recorded their parts first. Later, Dave Preston added a joyous, Edge-like guitar riff that really finished the tune. “It came together so quickly,” Shimabukuro says, “and when I heard the final mix, I just thought, ‘Wow, this has been the greatest day!’”

“Pangram” has already turned heads in concert. Titled after a sentence that uses all the letters in the alphabet (“like ‘the quick brown fox jumps over a lazy dog’”), it’s based on a chromatic scale that utilizes all the notes in the Western music scale. But even non-musicologists will ride happily along its rivers of cascading melodies and its pumping, rock-soul rhythms.

Another treasure is “Straight A’s,” a carefree and vibrant ride guaranteed to lift spirits, on which Shimabukuro’s soulful soloing recalls one of his influences, Carlos Santana. The song was inspired by the A string on the ukulele. “I wanted to write something where the ‘A’ note could ring out through the entire song.”

“Mahalo John Wayne” is a flat-out stunner, a delicate melody that transforms into a grand-scale cinematic symphony. Discussing its origins, Shimabukuro explains that his father’s favorite actor is John Wayne (“He named me Jake after one of the Duke’s characters, in the movie ‘Big Jake’”), and that the two of them would often watch Westerns together. “Those are some great memories of mine,” he says, “so, I’m saying ‘thank you’ to John Wayne for my name in this song. In Hawaiian, ‘mahalo’ means ‘thank you.’”

As always, Shimabukuro’s playing has a wonderful quality to it – there’s an innocence, as if each phrase feels new to him. This sense of discovery is abundant on his astonishing reinterpretations of songs such as the Beatles’ “Eleanor Rigby,” now re-imagined as a driving and insistent ballad, brimming with furious jazz chords and a spirited back-and-forth between Shimabukuro and dobro legend Jerry Douglas. “It was such an honor to have Jerry guest on the record,” Shimabukuro says. “He was only going to play on one tune, but we had such a great time that he stayed and played on two more tracks. I hope we can do more together one day.”

The two go toe to toe on Jimi Hendrix’s freak-flag classic “If 6 Was 9,” spiraling off into a spacey, jazz-rock odyssey that manages to be reverential to the original while simultaneously distinguishing itself as a bold new tour de force. Shimabukuro’s wild wah-wah lines form transfixing sheets of sound, and he even pulls off a neat trick, varying some of his melodies to recall another Hendrix standard, “Little Wing.” “I wanted to throw in something unexpected, because that’s what I felt like Hendrix would do.”

The Zombies’ psychedelic rock nugget “Time of the Season” was one Shimabukuro often heard in his house growing up, and on The Greatest Day he trips into nostalgia with an elegant rendition that features some of his smoothest, Wes Montgomery-like phrases. “I couldn’t wait to play this one for my parents,” he says. “As soon as they heard it, they were like, ‘Oh, wow! You covered the Zombies!’ They thought that was pretty cool.”

The Greatest Day concludes on a stately note, with a sparse yet exquisite reading of Leonard Cohen’s iconic hymn “Hallelujah.” Each line that Shimabukuro plays seeps into one’s heart and soul, proving that music is indeed the universal balm. “I had recorded it before, but after Cohen passed I wanted to re-record it – I felt a new emotional response to it. It seemed like the perfect way to end the album.”

Only he didn’t end it there: Shimabukuro was particularly excited about his playing on a recent round of dates with bassist Nolan Verner and guitarist Dave Preston. The addition of a guitarist allowed him to solo more expressively than ever before. The digital edition of The Greatest Day includes a beautiful live version of “Blue Roses Falling” that features Shimabukuro dueting with cellist Meena Cho as well as a concert recording of “Kawika” (originally made famous by the Sunday Manoa).

The CD and vinyl versions of the album include both tracks along with three more cuts including immersive takes on “While My Guitar Gently Weeps” and Shimabukuro’s own “Dragon,”. There’s even a slinky, ultra-funky interpretation of Bill Withers’ hit single “Use Me” that sees Preston showing off his soulful vocal chops. They were recorded live with no overdubs at various venues by engineer Brett Lind and mixed by Jack Clarke (who engineered Nashville Sessions and The Greatest Day).

Shimabukuro has already been performing some of the material from The Greatest Day live, and he’ll soon work more songs into his set. In mid-July, he embarks on an extensive tour of the U.S and a fall tour of Japan. “I’m really excited to play the new songs in my shows,” he says. “Making this record was one of the highlights I’ve had in the studio. I couldn’t be happier with the sounds and arrangements. But most of all, we had a ton of fun making it.”

Along with his tremendous professional achievements, Shimabukuro’s personal life is filled with riches: He’s a loving husband and proud father of two boys. While balancing career with family, he also remains firmly rooted in his commitment to community, frequently performing at schools in Hawaii and overseas, urging youngsters to find their passion and live drug-free.

Uploaded by RasBobre Recordings on August 15, 2019