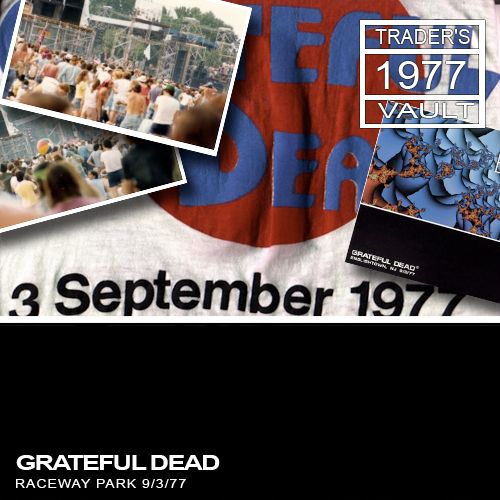 Promised Land, They Love Each Other, Me & My Uncle, Mississippi Half Step, Looks Like Rain, Peggy-O, Minglewood Blues, Friend Of The Devil, The Music Never Stopped

Show information is embedded within the header of each flac file.

It will display on any player capable of directly playing flac files.

If converted to wav during processing, all tags will be stripped,

however audio data will remain unaffected.

If you must transcode to a lossy format, do so directly Flac > Lossy.

Use ffp to validate audio integrity.

Md5 values will change if tagging is altered.

Transferred by
Matrix by Dave Usborne

Reviewer: RiPHRaPH - favoritefavoritefavoritefavoritefavorite - September 7, 2021
Subject: All Time Versions
Jerry’s back up vocals on Promised Land tells that his mix, drugs and sound is spot on tonight. The guitar leads in the best TLEO since’73 is outstanding. Heck, a top 1/2 Step, Peggy-O…a FOTD that is up beat and interesting with a crescendo within TMNS to end that great first set.
Proper tempo on Bertha gives it snap. Jerry’s pedal was dialed in perfectly for the Estimated Eyes. They pulled off an energetic He’s Gone, another song that became meh in later years.
How many shows do you get a Good Lovin’ and NFA. And really good versions as well.
Keith was outstanding throughout. The Dead took advantage of Mickey’s still recovering arm as Billy led the way and took this show in a more jazzy tone like in’73-‘74. A third trimester pregnant Donna was mixed well and in line.
The whole show has a certain ease about it.
Phil and Jerry talking to the crowd on mic. Rare for the time. Bob is in fine voice and is still rocking out on the always difficult Truckin.

Overall, top versions of many songs. Did I mention the Loser? #1. Listen to this show intently and then try and push any of these songs out of the top 5-6 in your world.

I’ma big fan of this show and this is the hill I’m going to die on.
Reviewer: capsgd - - August 27, 2021
Subject: Quo Vadis?
PLEASE TAKE ALL SERMONS TO ANOTHER MOUND


Reviewer: c-freedom - - May 13, 2021
Subject: I will not forgive you if you will not take the chance.
NFA to the Deadheads at GD forum Sunday, May 16, 2021
https://docs.google.com/document/d/1oqC_PDyyNzODcGvoof8INcmvNg6HugsLs6vqUmznOyY/edit

Reviewer: GenXHead33 - favoritefavoritefavoritefavoritefavorite - March 6, 2019
Subject: Truckin’ Returns
The DP of this one is surely worth picking up, especially since some of the proceeds goes to the financial furthering of the band we all know and love. Nevertheless, just got done listening to the 3 night stand at Winterland 6/7-9/77 and though the playing here is amazing and great for many reasons it can’t touch those Winterland performances in terms of sound quality. I don’t usually judge these shows one against the other but I mean it’s like night and day. It’s probably due to the fact that this is a two-track source for the preFM sbd sound and also it’s an outdoor venue here. . I’m probably getting too persnickety and technical sorry I do love auds and matrices. This was the band’s first show since those Winterland performances and they were playing on a whole other elevated level. It’s nice to Truckin make it back into the rotation, though not the most powerful version here it’s great to hear them walk this horse out of the stable. As everyone and their grandmother nentioned this show is notable for the 1/2 Step, Estimated/Eyes, He’s Gone and NFA. Other than that it’s for nostalgia and history’s sake that brings me back to this solid show. This, along with MIT Fall 1970 we’re my first two tapes. Still, great show, it’s 1977 y’all, it’s up there with best.
Reviewer: PFflyerkid - favoritefavoritefavoritefavoritefavorite - October 11, 2018
Subject: Geez....Eyes
Here it is 2018, and I’ve been listening to this show since 1978, and the Eyes always amazes. Except for some very well placed Bob licks, this one has Jerry back and forth on rhythm/lead/rhythm/lead that showcases Jerry’s talent like very few others. And the final solo he progresses to and falls into....absolute sheer bliss.
Reviewer: guit30 - favoritefavoritefavoritefavoritefavorite - March 22, 2017
Subject: awesome recording of a grate show
This guy does a grate job of mastering this show, and it just sparkles. I was at this show and just one one of my best memories of a Dead show. I have the Dick's picks #15 of this, first HDCD by the Dead. Glad this is here!!
Jim
Reviewer: kidrootbeer - favoritefavoritefavoritefavoritefavorite - January 15, 2017
Subject: Eyes of the World
One of the Best that you will ever listen to
Reviewer: NewlyGrateful - favoritefavoritefavoritefavoritefavorite - February 27, 2016
Subject: Amazed by the quality of thise recording
I'm new to the GD, so I'm just starting to listen. To be honest, it's a bit overwhelming how much history is in these recorded shows. Over the last six months I've picked a handful of show I kept going back, and only recently have I been exploring other shows as I see recommended. This show was recommended in the comments at youtube(v=30f_Eo9ynW8). After listening to all the recording, this one is by far the best. The sound is loud, clean, and I love I can hear the audience. Too many recordings leave that out, but to me the crowd adds to the vibe.

Could be just me but 1977 shows seem to be pretty good.
Reviewer: Traction - favoritefavoritefavoritefavoritefavorite - September 30, 2014
Subject: A Big Night
Once every few months, I start "hearing" the Dead again. It happens when the passion comes through - when it catches the arc of the musical journey and refracts through the crowd which catches the energy and pitches it right back, and the whole thing magically increases the band's abilities on a particular night, and we all touch the sky (apologies to Jimi!). I think the night simply lifted off during Mississippi Uptown - Jerry just blasted off, Keith showed intense focus and musicality - and then I think everyone - 150k people - was aboard for the next 2.5 hours. The quintessential experience. And unlike most times, I think you can actually hear it here. Great matrix - thanks!
Reviewer: chris phillips - favoritefavoritefavoritefavorite - September 25, 2014
Subject: Englishtown
This is another good matrix from D. Usborne who has made interesting choices this summer.
The Half Step, Music, Eyes, He's Gone and Not Fade Away are classic versions. The latter two sound more dynamic within the matrix. Thanks!

Uploaded by Matthew Vernon on September 13, 2014