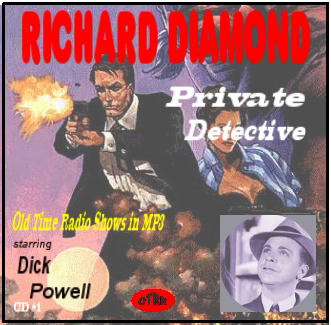 In 1945, Dick Powell portrayed Phillip Marlowe in the movie "Murder My Sweet" based on Raymond Chandler's novel "Farewell My Lovely". This was a radical departure in character for Mr. Powell from a Hollywood song and dance man to a hard-boiled detective. On June 11,1945, Lux Radio Theatre brought "Murder My Sweet" to radio, again with Dick Powell in the lead. These two performances prompted his selection for the part of Richard Rogue, in Rogue's Gallery after his role for Lux Radio Theatre and Richard Diamond came four years later.

Richard Diamond, Private Detective came to NBC in 1949. Diamond was a slick, sophisticated detective, with a sharp tongue for folks who needed it. Diamond enjoyed the detective life, but not as much as entertaining his girl, Helen Asher. After each show, he would croon a number to his Park Avenue sweetheart. Mr. Powell, a former song and dance man, was perfect for the role. He added an extra dimension to the 40's hokey private eye drama.

Diamond was a rough gumshoe that would often get knocked on the head with a revolver butt or other items. His counterpart on the police force was Lt. Levinson who often accepted Diamond's help reluctantly. Levinson would claim to get stomach trouble whenever Diamond would call him and would take bicarbonate to settle his aching stomach. Although they always seem at odds with each other, Diamond and Levinson were best friends.

The plot theme remained fairly constant throughout the entire run of the show, Diamond getting beat up and solving a tough murder case with the support of the police department. Remarkably, for all the gun fights, Diamond never got shot. And for all his bravado, he had a serious case of vertigo.

Helen Asher was portrayed by Virginia Gregg, who also played the part of Brooksie on Let George Do It and Betty Lewis on Yours Truly, Johnny Dollar. Blake Edwards wrote the early shows and also directed a few. Music was composed by David Baskerville and later by Frank Wirth.

From the Old Time Radio Researchers Group. See "Notes" Section below for more information on the OTRR.

For the full OTRR Release, see the OTRR Certified page:

- Old Time Radio Researchers Group
Reviewer: Justine Dean - favoritefavoritefavoritefavoritefavorite - November 21, 2019
Subject: Dick Powell fan
Okay where do I begin this show is funny romantic suspenseful dramatic everything one can expect from a show... Dick Powell was soooo underrated... He is my favorite Radio star.. writing is so clever and characters of lt Walt and Otis are just Cherry on the cake... Tho other actresses play the role of Helen but you can easily make out why Virginia Greg in most of them she's lovely
Favorites- to gaurd a seal(hilarious), the house of mystery (suspenseful) Joyce wallace ( dramatic) and a special mention to the singing critic the one the neighbor is amazing other episodes like little Chiva, burglers protection, the grey man are favorites
Reviewer: lvthclscs - favoritefavoritefavoritefavorite - September 25, 2019
Subject: Old Time Radio Boomer
Are there more episodes of Richard Diamond Private Detective & will they be added?

Very few sour notes to be heard from this song and dance man!
Reviewer: Billbo7753 - favoritefavoritefavoritefavoritefavorite - August 28, 2014
Subject: Thoroughly enjoyable
A very slick, tongue in cheek, detective show. Dick Powell show cases his wide variety of talent including his singing ability on the prompting of his girlfriend, Helen, played by Virginia Gregg. One of my favourite songs was his rendition of "Dear Hearts and Gentle People" as Herbert Appleknocker from Mountain Dew, Alabama. (See "The Jewel Thief", 19 Feb 1950.) Thanks to the OTRG for putting this online.
Reviewer: Hanguard - favoritefavoritefavoritefavorite - November 19, 2013
Subject: Much more than mediocre.
Its a good show, especially good for how long ago it aired. I have listened to a lot of the episodes, and I have these problems. Richard insults Otis much to often, and for barely and reason other than Otis being not being the sharpest tool in the shed. But I guess its just comical. Another little problem I have is, he and his girlfriend are very rude to that guy that lived downstairs in The Singing Critic. I would also hate to have a girlfriend that forces me to sing before I eat dinner. Again, the singing part at the end of an episode is supposed to be at the end of every episode. I also do not like how in some episodes they give away who the baddie is. All in all, they are interesting to listen to, but im going to move onto some other shows. This is quite a poorly written review, but I just wanted to state my problems. I give this show a 4.
Reviewer: Man from Arles - favoritefavoritefavoritefavoritefavorite - October 24, 2013
Subject: Richard Diamond Private Detective
"Richard Diamond" is an extremely well-done show. Hard-boiled, but well-leavened with humor. Rick can handle himself, with his fists as well as with the dames. And he's a crack shot - if I had the time, I'd like to count up all the bad eggs he's been forced to shoot.