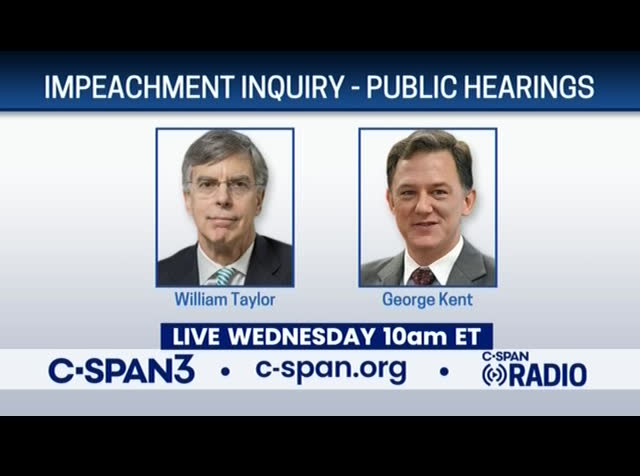 assistant .ecretary of state toerj kent you can watch live on c-span.or fwchlt or listen on the pre-c-span radio app. the house impeachment inquiry and response on c-span. reairs on time c-span or stream or demand at c-span.org/impeachment. >> president trump offered a tribute on this veteran's day to d in the armed forces and spoke at the opening annual parade rganized by the war veteran's council, the first sitting event.ent to speak at the
3:04 pm 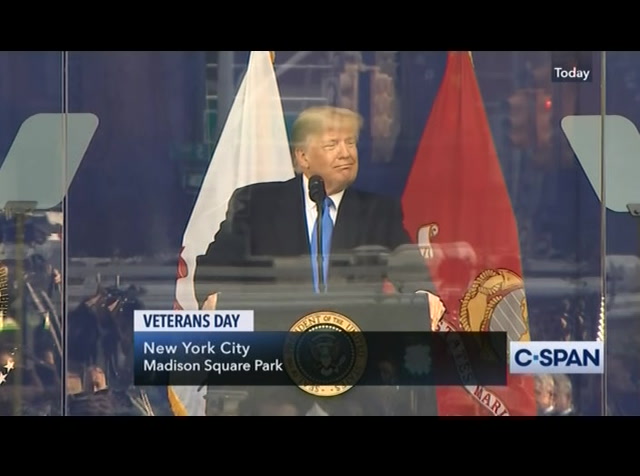 stanley you very much, and thank you for your tremendous support of this wonderful parade. today we come together as one oftion to salute the veterans the united states armed forces, greatest warriors to walk the face of the earth. our veterans risk everything for us, and is our duty to serve and protect them every day. it's an honor to come back no new york city right here in madison square park to be the first president, ever, to attend ade.ica's par
3:05 pm 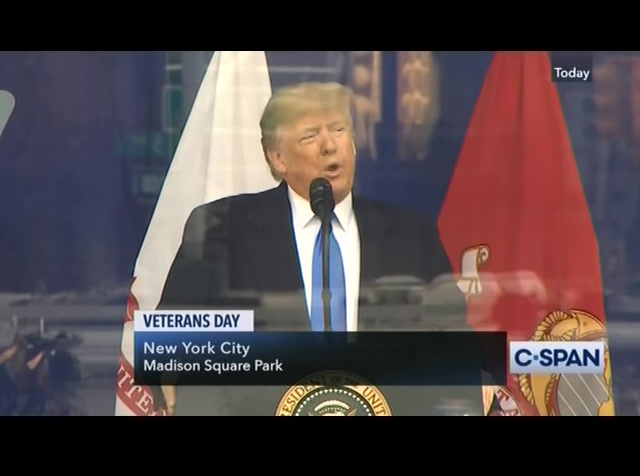 to every veteran here with us, arch ousands preparing to m on fifth avenue it will be something. and to the 18 million veteran as considers the country, the first lady and i have come to express lasting love and 327 million americans. burn to recognize james for joining us. , thank you, mes james. great job. pleased to report that our and the work we've done, veteran's va is at ion with the 90%, the highest ever recorded in had the history of the program. that is awely good and e're proud of you and the secretary. thank you very much. great job.
3:06 pm 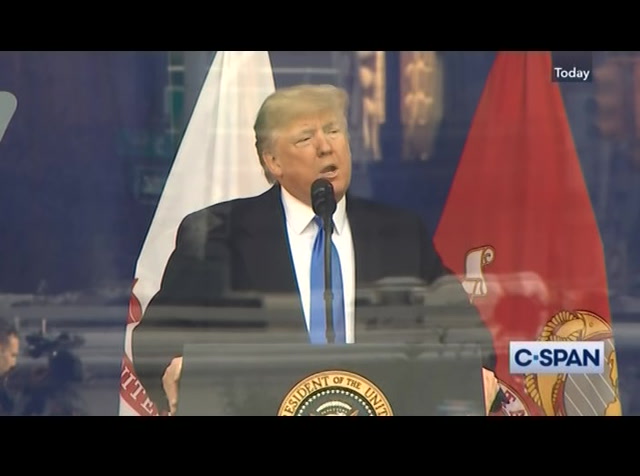 is new york city bill de-blasio. thank you. along with many other distinguished guests. thanks to everyone at the united ing veterans council for putt on this event including bill hite, doug mcdpouan and a connect 1200ngledgement
3:07 pm 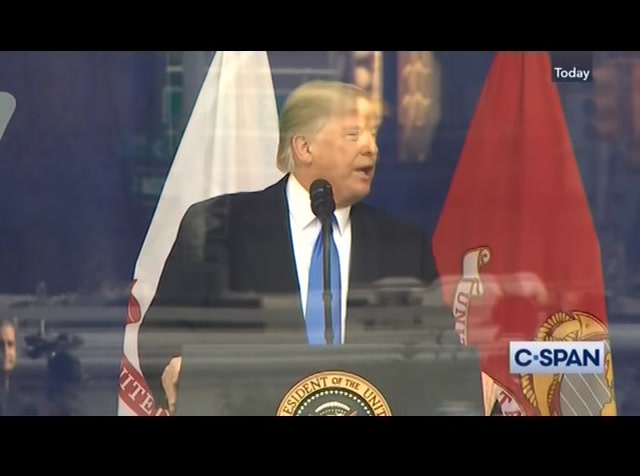 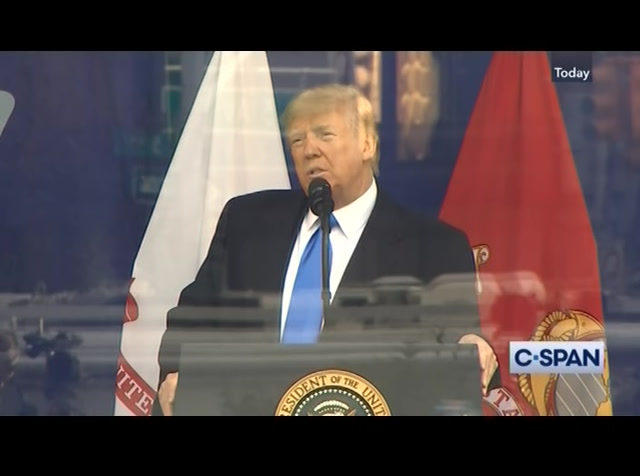 foundly moved to have with us veterans of world connect 1200 new york city sinc
3:09 pm 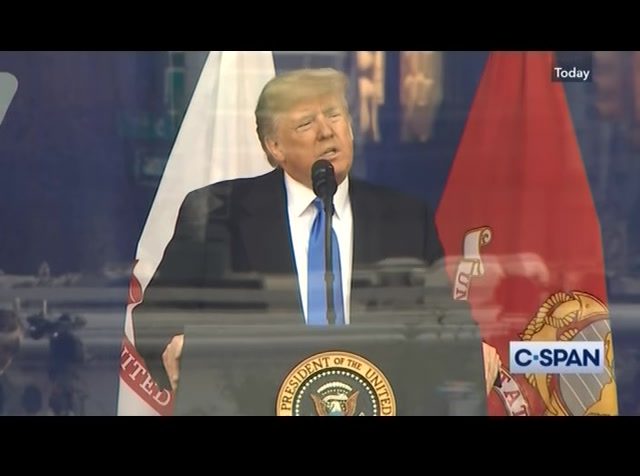 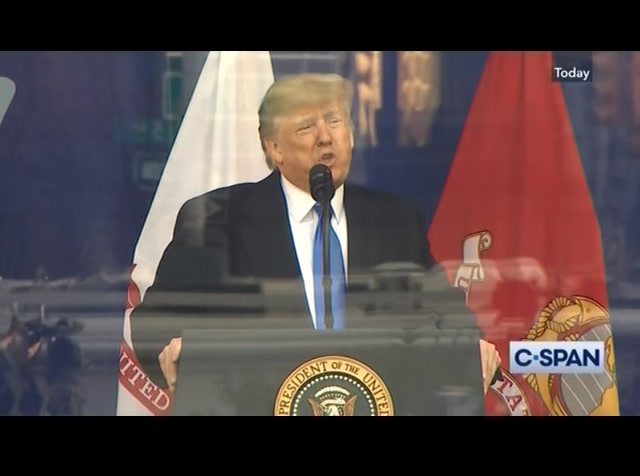 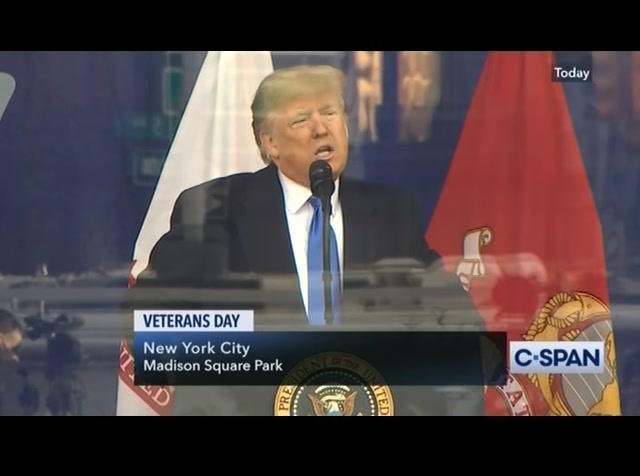 t of has been at the hear our nation's story of daring and defiance. on july 2, 1776, the british arm madda sailed into new york ships and bing 400 carrying 30,000 men. british came here to snuff out what they thought was a minor american revolution. it didn't turn out to be that way. ts did know is that they're going to have a problem. know new york would wer them with fear some po of american patriots. n world war i, new york renalingments like harlem and ng 69thttalion and fighti were referred around the globe , 63 million war ii
3:12 pm 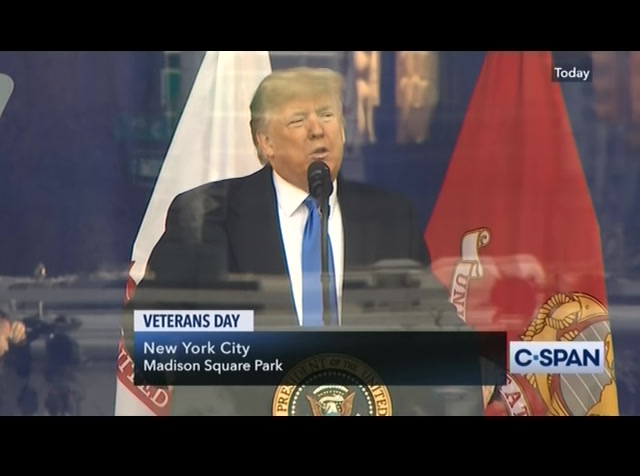 3 million plies and service members shipped out of new york harbor. september 11th, 2001, the world horror and responded to america's wicked enemies with rage, unbreakable and resolve that is deeper than oceans, fierceer than fires and stronger than steel. last week i was honored to ward zens medal to iti an extraordinary american. rick rsacorla. terenlisted at recruiting cen in times square, became a great war hero in vietnam and became head of security at morgan stanley in the world trade center. 2700 tember 11th he saved lives before giving his own, today, we're grateful to be
3:13 pm 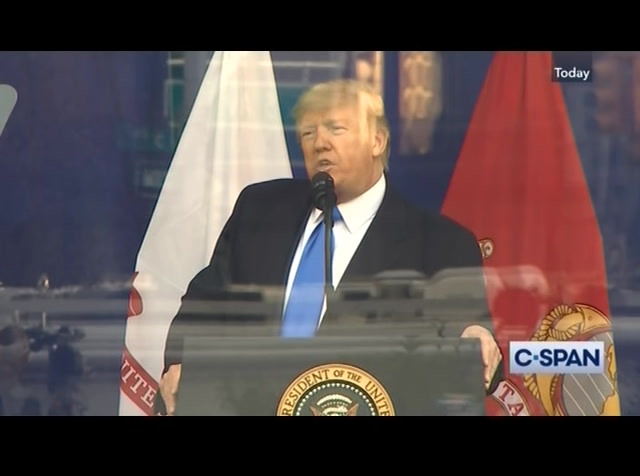 joined by rick's son, trevor. thank you trevor, thank you. thank you very much. thank you. to trevor and every september 11th family we pledge to never, ever forget. he towering spirit of strength we see in this city lives within the heart of every american here valley forge of to jungles of vietnam, to forests of bell belawood to peaches of normal dito deserts it has helped spir ts, andhters defeat tyran communism and face down terrorism. american special forces raided the isis compound nd brought the world's number
3:14 pm 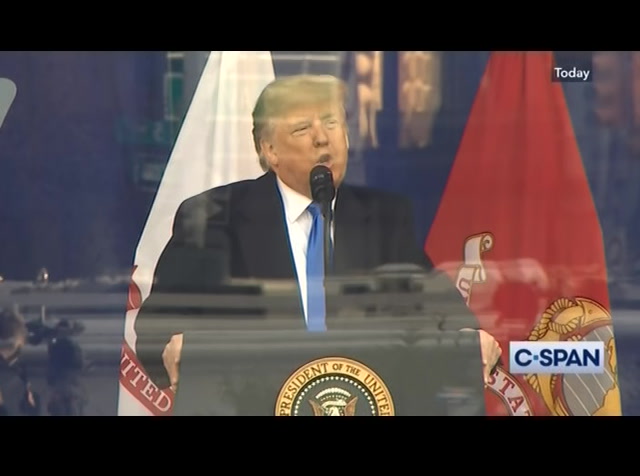 one terrorist leader to justice. thanks to american warriors, al baghdadi is dead. his second in charge is dead. number threeyes on and his reign of terror is over ng very, es are runni very scared. thank you. thank you. those who threaten our people don't stand a chance against righteous might of the american we'll y, in a few weeks mark the 75th anniversary of the battle of the bulge. our nation's bloodiest patel of world war ii. 47,000 americans were wounded and 19 howe gave their last for their country. we're joined by a veteran of the
3:15 pm 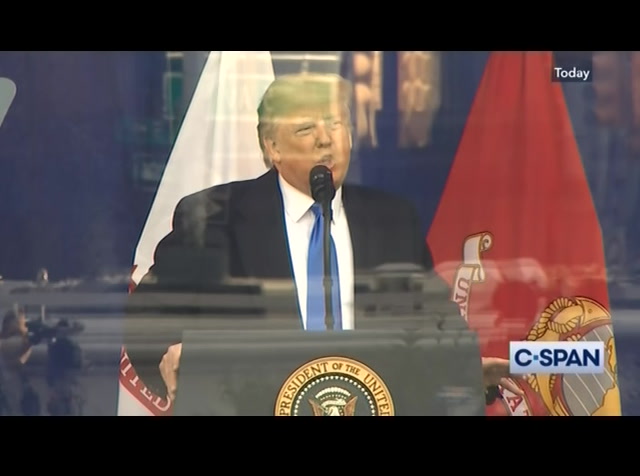 patel of the bulge. a native new yorker is 94 year going strong. al jack foy. jack.ook good you look good. enlisted after high school and bought through brutal months e, on christmasnc eve, marching nearly 100 miles outside ow he arrived s the town of bastone thi belgium and fought under ceaseless artillery fire and helped push the enemy back from a critical road. at one point a mine blew up and destroyed his vehicle, badly hurting many. but s wounded three times and jack fought
3:16 pm 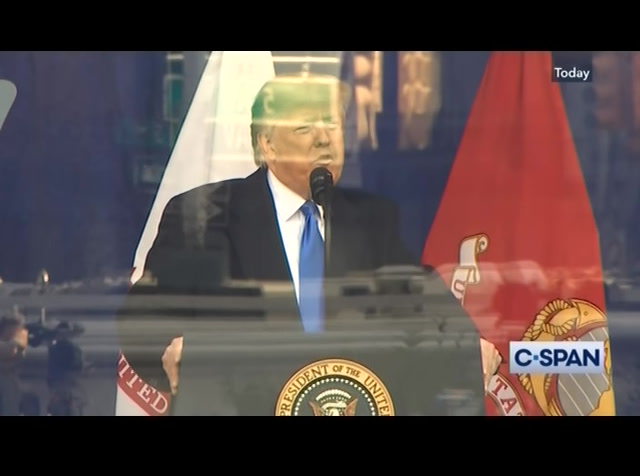 ins of remaining nine mosul river up the and through germany until orduruf, gates of first ration camp, the nazi concentration camp to be liberated. that was number one. jack said about the battle of the bulge, when the chips were down and situation desperate, stood up to bers counted. hese men held our nation's destiny in their hands. we did not fail. jack. you very much, great. corporate foy we'll be forever proud of what you and your ellow soldiers arrived for
3:17 pm 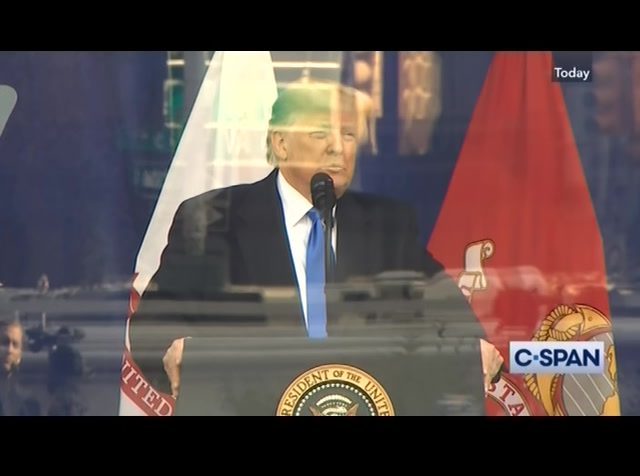 humanity. also with us is a battle of than who since passed away. like many of our veterans ronnie never talked about the war. laura never knew her grand father's story until embarking years ago. project 0 regiment n the 422 overwhelmed had the nazis launched a surprise assault. he and his men fought three days perfect being taken as prisoners of war. a prison camp,in commander said the jewish merican soldiers were told to during roll ine
3:18 pm 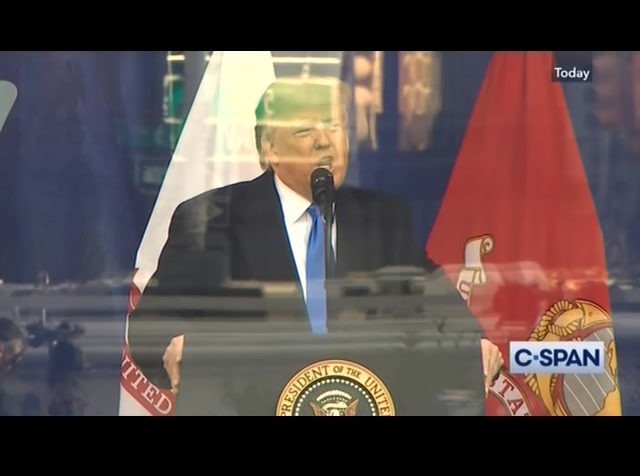 call the next day. knowing the terrible fate he his jewish o comrades rode immediately said e're not doing that and sent orders to have every american step out of line with their thers in arms. 1292 americansg, stepped forward. rmed erman commander sto over to rode and said they ws.not all be je rode stared back and said, we all jews here. and that point, the german put a head and demanded you will order the jews to step forward immediately or i will shoot you right now through the head. major, you can hoot me, but you'll have to all. us
3:19 pm 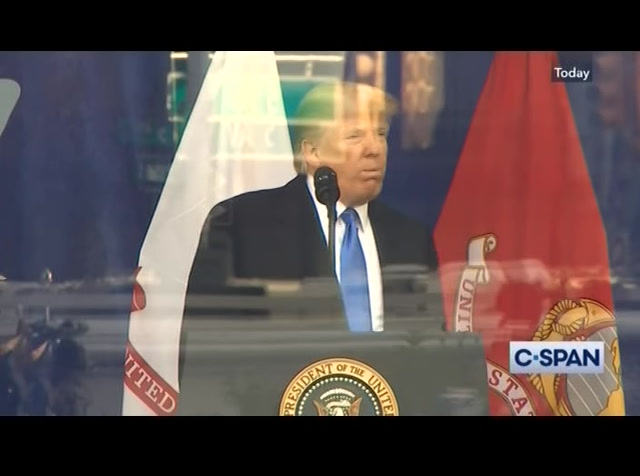 the german turned red, got very down and put his gun walked away. ergeant had saved 200 soldiers that s, ay, so proud to be jewish and country. of our thank you lauren for being here today as we remember your grand father's unbelievable and exceptional valor, lauren please up.d thank you very much. one of the 200 jewish american soldiers save that had day is staff sergeant lester tanner, years old. us here.he joins
3:20 pm 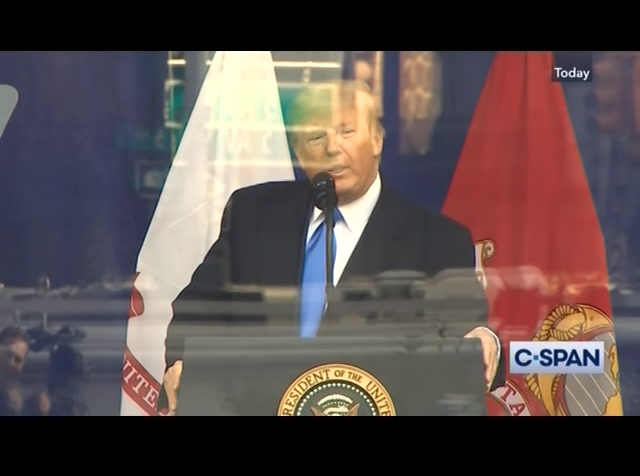 boy, you guys are looking very good. 96. lester, you're really 96 lester? i don't believe it. good. looking much. you very thank you for sharing this story with the world. thank you very much. men and women have donned our nation's uniforms are the toughest, strongest and virtuous warriors to work on earth. face-to-face with evil, and you did not back down. you returned home from war and never forgot your friends, who didn't return including risoners of war, and those missing in action. them.ery day you pray for your greatest tribute is the way you lived your lives in the
3:21 pm 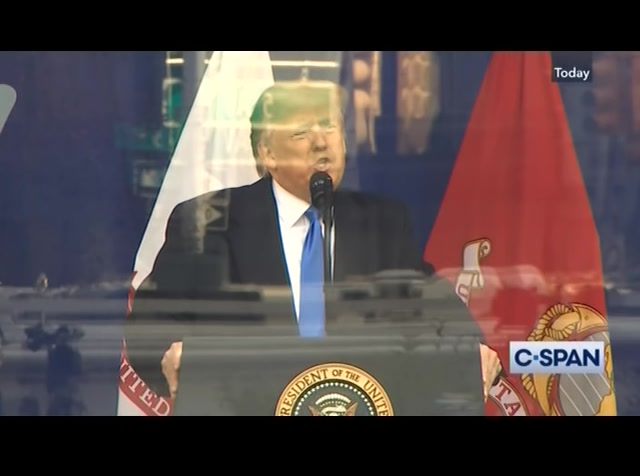 years since. you raised your families, you wounds of war and endured pains of that memory. you kept going and serving and loving.ing and you keep you volunteer at your local veterans post. you keep in touch with your gold es and support our star families and take care of our wounded warriors and stand alongside of our service members when they return from war. on veteran's day our nation itself to our sol yum duty. we can never repay our veterans with supreme ld vigilance or obligation to care born the who have battle.
3:22 pm 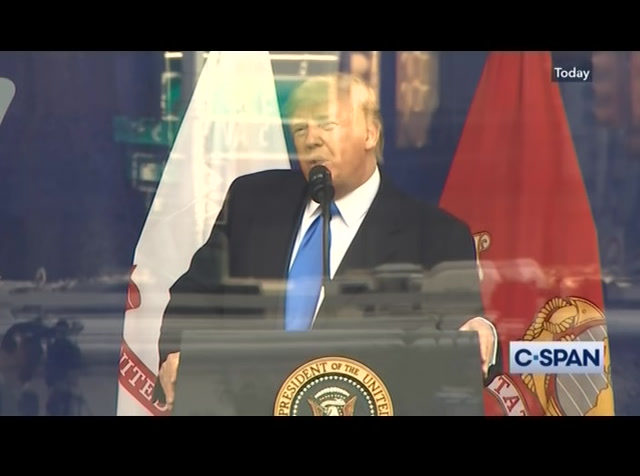 oment we'll have a molt of silence and lay a at the eternal light monument. we pledge to pay a tribute to those who laid down their lives so that we might be free. together we must save guard what fearless patriots gave everything to secure. we'll protect our liberty, up fend our home.d de ensure legacy stands as a testament to this nation from now until the end of time. ery veteran here today and across the land you're america's heros and we g always, ish you now,
3:23 pm 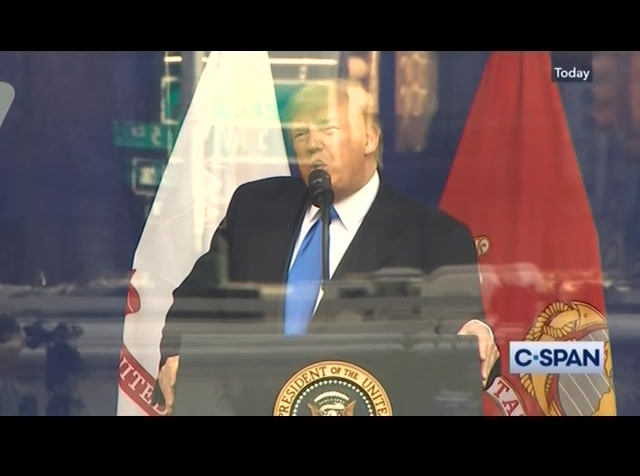 and forever. hank you, god bless our veterans and god bless america. thank you. much. you very >> thank you very much. at this time, the marine corps will carry a wreath. therethe wreath is placed will be a moment of silence followed by a rightful salute of. playing of "taps" and e rise if you're able remain standing throughout the
3:24 pm 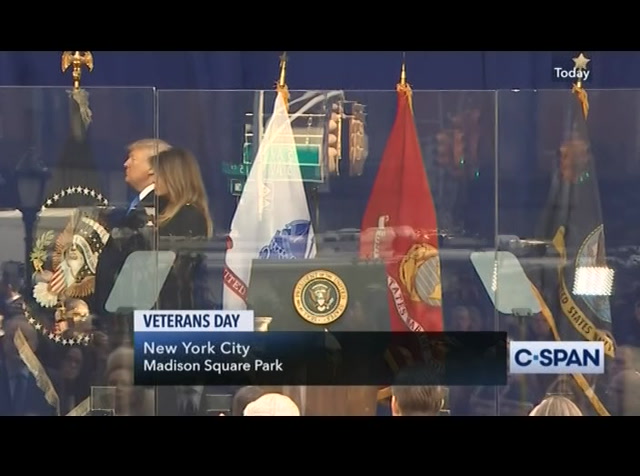 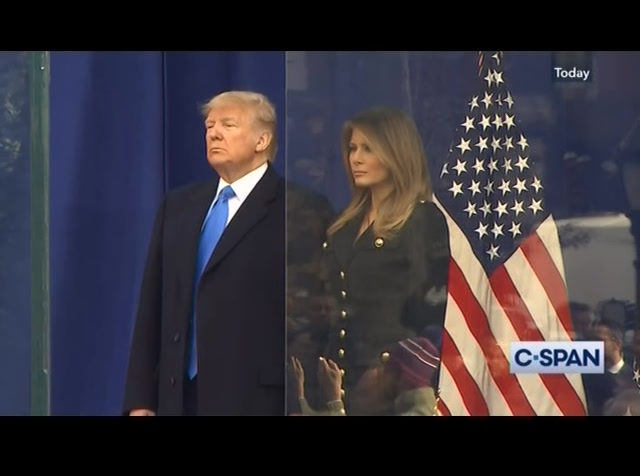 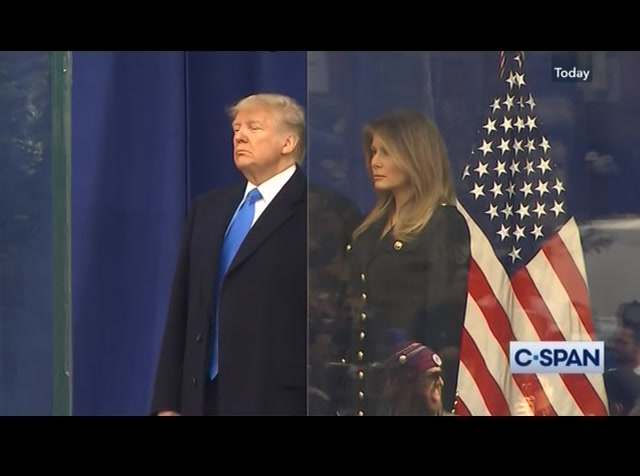 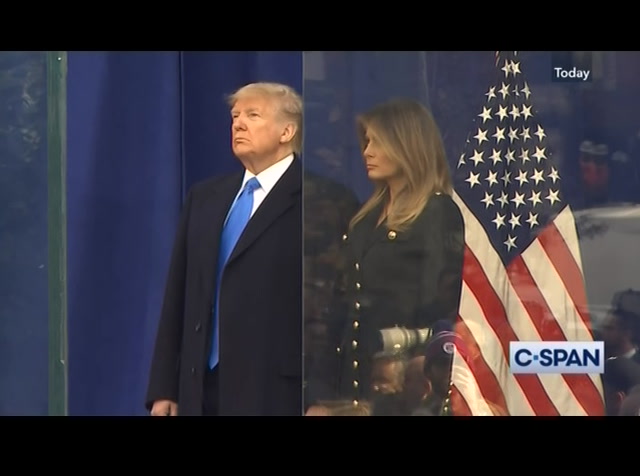 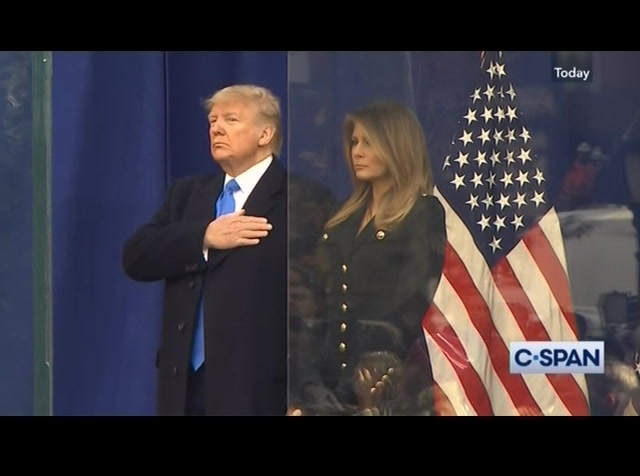 . playing taps ] >> ladies and gentlemen this, concludes the wreath laying. please remain standing in until party, after which
3:29 pm 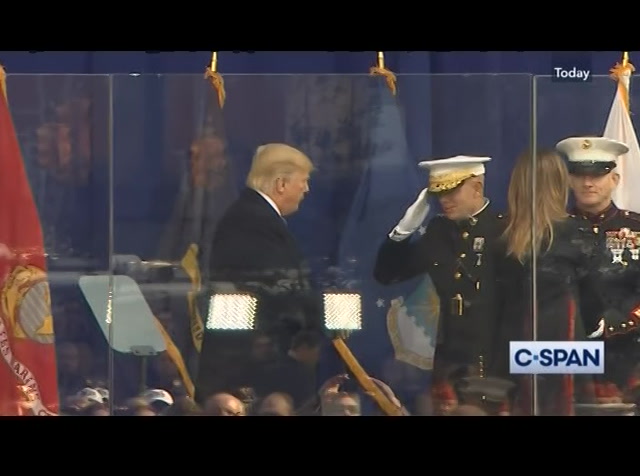 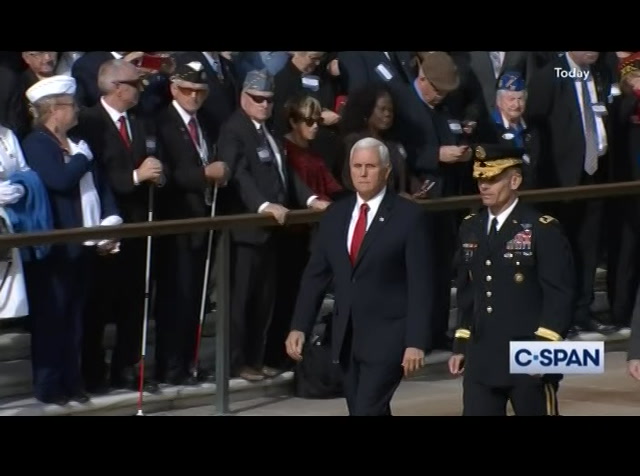