Beyond Vietnam: A Time To Break Silence 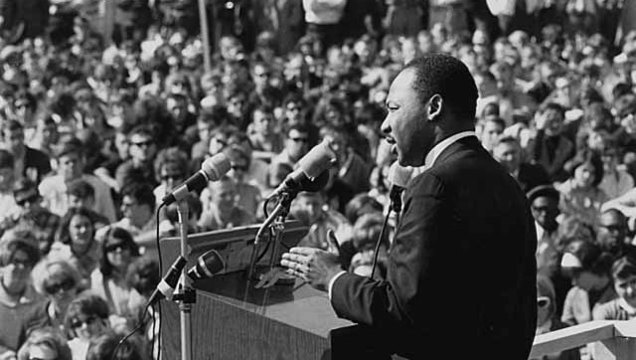 Beyond Vietnam: A Time To Break Silence

"Beyond Vietnam: A Time to Break Silence", also referred as Riverside Church speech, is an anti-Vietnam war and pro-social justice speech delivered by Martin Luther King, Jr. on April 4, 1967. The major speech at Riverside Church in New York, New York, followed several interviews[2] and several other public speeches in which King came out against the war in Vietnam and the policies that created the war. Some, like civil rights leader Ralph Bunche, the NAACP, and the editorial page writers of the Washington Post and the New York Times called the Riverside Church speech a mistake on King's part. Others—including James Bevel, King's partner and strategist in the Civil Rights Movement—called it King's most important speech. It was written by activist and historian Vincent Harding.

King delivered the speech, sponsored by the group Clergy and Laymen Concerned About Vietnam, after committing to participate in New York's April 15, 1967, anti-Vietnam war march from Central Park to the United Nations sponsored by the /Spring Mobilization to End the War in Vietnam.

Personal note: I realize this is available all over the internet and probably even on archive.org, but I am adding it here, 0once more, as well because it is, IMHO, this is the single most powerful speech ever given.

Uploaded by altviewstv-fanclub on August 18, 2015