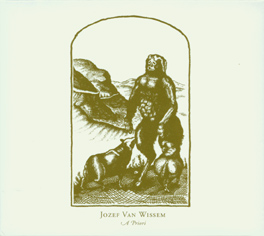 Jozef Van Wissem's favorite compositional device is the palindrome. The Dutch-born, Brooklyn-based lutenist plays pieces forward, then backward, creating music that is potentially without beginning or end. Although this strategy is rooted in 17th century compositional practice, it still serves his agenda of rescuing his archaic instrument from history's dustbin. His use of mirror-image structures is as informed by Lacanian psychoanalysis as by centuries-old repertoire. A former guitarist with a taste for country blues, Van Wissem came to the instrument as a way of affirming with his essential European-ness; ironically he used an artifact of the Renaissance to accomplish the decidedly post-Freudian pursuit of self-consciously establishing a self-identity. On an even more symbolic level, by constructing pieces that begin where they end and are therefore potentially endless, he subverts the march of time; why can't obsolescence also be reversed?

On other records, Van Wissem has re-contextualized the lute by treating its sounds with electronics, juxtaposing it with field recordings of large public transit facilities, using it to improvise with Tetuzi Akiyama, or enlisting Mauricio Bianchi to transform its resonance into grim noise. A Priori offers his unadulterated take on the instrument, performed without accompaniment or outboard effects. Its sonorities, articulated in unhurried cadences, may sound ancient, but the language of dissonant harmonies, tone clusters, and rare bluesy flourishes to which he applies them is rooted in the 20th century avant-garde, not the time of bards in tights. The way Van Wissem traces and retraces A Priori's seven palindromes, denying the listener any resolution or catharsis, is also pretty contemporary in its attitude of refusal; has there ever been a time besides now when more musicians refuted the expectations of audiences and authorities?

A Priori does not reward casual listening. Its slow cadences and well-proportioned tones feel contemplative, but the lack of pay-off makes the music potentially maddening; it actually stymies linear thought. If you want easily approachable Van Wissem, try his album he and James Blackshaw made as the Brethren of the Free Spirit. This record is best approached as obsessively as it was played. Spin it over and over and eventually the pieces really do lose beginning and end, seeming instead to hover in a timeless now.

1 - How The Soul Has Arrived At Understanding Of Her Nothingness

3 - Into the Abyss of Perdition

7 - The Soul Leaves The Body In Eternal Glory